I am currently lucky enough to live with two very cute and cuddly boys, Gus and Tycho (who tweet at @katskitties for the vanishingly small number of people who might find this blog from somewhere besides their twitter feed). 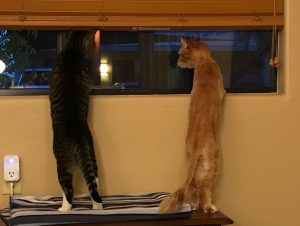 Tycho is a 16 year old, longhaired orange tabby. He is definitely an old man in that he sleeps a lot, but he’s still plenty feisty when he is awake!  He loves to “sing” and is a fan of wrestling with Gus. I adopted Tycho a bit more than 11 years ago. I adopted Gus just a year and a half ago. He’s a 4 year old, shorthaired grey tabby.  Like Tycho, Gus loves sleeping, but he has more energy to burn due to his youth! His hobbies include chasing his tail, lobbying for wet food, and sitting on the dining room table when I’m not home to scold him for it. Both of their adoption stories are below! 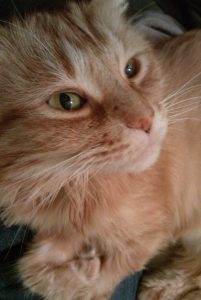 I met Tycho in the fall of 2006, shortly after I moved to Tucson for graduate school. As soon as I was settled into my new apartment (and had sorted out getting paid by my new department!), I went to the Humane Society of Southern Arizona to find myself a feline companion. I had decided ahead of time not to adopt a kitten because adult cats are too often overlooked at shelters, and kittens are trouble! When I got to the shelter, I went straight to the wall of adult cats and noticed a very sad and timid looking orange floof ball. The card on the cage said that this poor dear was a 5 year old female (we’ll come back to that…) named “Chesty” (11 years later I still can’t get over that awful name…).

Before the shelter, Chesty had apparently lived with an older woman who then passed away. The woman’s neighbors took the cat in for a little while after that happened, but they had small children and the cat was not a good fit for their household, so they brought him to the shelter. Chesty had been at the shelter for several months already, and was labeled as a “discount” cat (meaning they would not charge the full adoption fee). They let me hold the cat on my lap, and even though it was pretty difficult to judge much about personality, etc, I decided that I had to give this unhappy kitty a new home. So I filled out all the adoption paperwork, and paid the adoption fee (only $20!). They said I could come back for the cat in a few days after they spayed her (this was before the HSSAZ was no-kill, so they didn’t spay/neuter cats until there was an adopter lined up).

Well, about two days later I got a call from the shelter’s vet clinic. They had prepped Chesty for spaying, at which point they discovered Chesty was actually a boy who required neutering. (At least they discovered this prior to making any incisions, which is more than can be said for my previous cat, Kepler. I’ll get to his story in another post, but I clearly have a knack for picking up cats whose sex has been incorrectly identified…) They asked me if I still wanted the cat, and I said that of course I did! So they proceeded with neutering. The poor kitty had a blood vessel burst while they did the procedure, which I was later told is a risk associated with being neutered at an older age, so he still ended up with an extra incision and stitches so they could stop the bleeding. That meant he had to stay at the vet clinic for an extra day or two, but I finally got to take him home about a week after I first met him.

I decided to name him Tycho because my previous cat was the aforementioned Kepler, and I was starting a PhD program in planetary science with a focus on orbital dynamics. So the name worked well (for the non-astronomy fans, Tycho Brahe was the astronomer whose very careful observations of the planets’ positions in the sky allowed Johannes Kepler to derive his laws of planetary motion around the sun). Tycho was very timid at first, just like at the shelter. He wasn’t into exploring. If I left him sitting on my bed when I went to campus, he’d be exactly where I left him when I got home hours later. But eventually he got more and more comfortable in the apartment, and started taking advantage of things like the nice kitty bed I bought him and placed near a nice sunny window.

While he was almost instantly very trusting of me, it took him many, many years to start to appreciate other people. But he’s now a very sociable kitty who will purr and accept scritches from almost anyone! 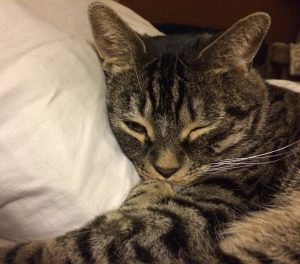 In the spring of 2016, Tycho was in need of another cat to keep him company, so I starting looking around town for a suitable companion. Finding Gus took more time than finding Tycho because I had more requirements this time around. I wanted to find an adult cat who was reasonably mellow and did not outweigh Tycho. I also wanted a shorthaired cat because dealing with the grooming requirements of one longhaired cat seemed like enough (I’m sure I’ll post about Tycho’s more intensive grooming requirements sometime!).

I went to the HSSAZ, but they didn’t actually have very many cats up for adoption, and none of the ones they had were quite right for being Tycho’s friend. (I was actually quite pleased that they had fewer cats, because that means they’ve been doing a good job adopting them out!). So I decided to check out the Hermitage Cat Shelter in Tucson. The Hermitage is set up differently than many shelters because they have series of rooms where the cats roam free together. They have separate areas for older cats, kittens, cats with special medical needs, etc, but most are in what they call a “general population” section of the shelter. So when you go looking for a cat, you can just wander around interacting with the cats, or just sit and observe.

I wandered around for a while, and I saw a lot of cats who were larger or fluffier or more energetic than I was looking for. But then I spotted a small tabby lurking in a corner, looking unsure about things. When I sat down and called him to me, he leapt right up into my lap and leaned against me. I was pretty much instantly smitten. His collar said his name was Gus Gus, and that he was about two and a half years old. I chatted with the volunteers there, and it turned out that it was Gus Gus’s first day in the general population room, and the Hermitage had just collected him from animal control a few days previously (no info on who dumped him there). He was a little younger than I was looking for, but he was so sweet (and timid!) that I figured his youth wouldn’t be too much of a problem for Tycho.

So I filled out the paperwork to do a foster-to-adopt for Gus Gus. I had to wait a few days while the shelter ran a background check, etc, but I soon got to pick him up to take him home. He cried in his carrier the entire 40 minute drive home, but once we got there he was so happy to explore his new room and get lots of attention! 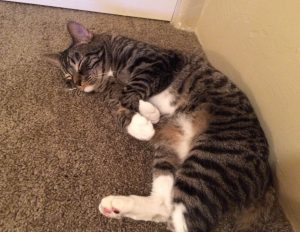 He spent his first evening and night in the spare bedroom so he and Tycho could hear and smell, but not see each other. The second day, Gus Gus and Tycho got to touch noses through the cracked door for a while, and then have some supervised time together. Gus Gus then got to explore the rest of the apartment for a bit with Tycho confined to the spare room. By the third day I stopped worrying about confining either of them and they did fine. There was some hissing (there’s always some hissing when you introduce new cats), but they were very civilized together. The Hermitage did the initial transfer of Gus Gus to me as a foster, just to make sure the two cats were compatible, but I went back just 5 or 6 days later to do the official adoption paperwork. I decided to keep his name because it suits him (he shares some personality traits with the mouse from Cinderella!). I did officially shorten it to just Gus, but his nickname is GG, and I still sometimes call him Gus Gus.

It took several months for all the relationship details to get worked out between Gus and Tycho, but they are a good pair. They’re not snuggly together (though they will sometimes simultaneously snuggle in my lap), but they keep each other entertained, and they love to get into a good, friendly wrestling match! 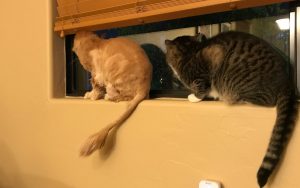 Advertising/making money is not the purpose of this blog, but I do often recommend and link to products that I genuinely use and like. G&T might as well have the potential for new kitty toys as a result of any incidental advertising because of this (see post about this here). So, disclaimer: Katskitties.com is a participant in the Amazon Services LLC Associates Program, an affiliate advertising program designed to provide a means for us to earn fees by linking to Amazon.com and affiliated sites.