I’ll be writing a few posts about the expenses associated with cat ownership, and they will all be filed under the terribly punny tag ‘kittieconomics’. I’m doing this to give prospective cat parents some idea of what expected (and less expected) costs can occur when you take on the responsibility for a cat and to share some of the ways I’ve found to keep large expenses (like vet bills!) under control.

This first post in the kittieconomics series is about the startup costs associated with obtaining a “free” kitten/cat (alternative post title: why I think adoption fees at shelters are usually an awesome deal!). It comes in the form of an origin story for one of my previous (and sadly long since departed) cats, Kepler, who I mentioned in Tycho’s adoption story. (If you want to skip Kepler’s story, there’s a TL;DR about cat startup costs at the end of the post!) 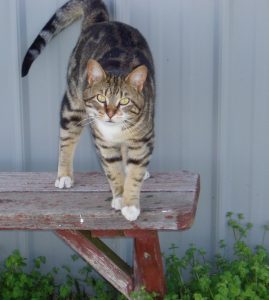 In the fall of 2004, I was a junior at Wittenberg University in Springfield, Ohio. Being a junior meant I was finally allowed to live in a house instead of in the dorms (though the house was still on campus), and that I was free from mandatory dining hall meal plans.  This freedom of course meant that my friends and I went out to eat off campus quite frequently. On one of those off campus excursions, we walked out of a restaurant and toward my car, only to be confronted by an adorable but sad looking tabby kitten. (I was not on top of the tech curve, so I didn’t have a camera phone and you will just have to take my word for it that he was adorable and a little pathetic looking at the time.)

The restaurant was located in a commercial area just off a very busy road, so I strongly suspect he was dumped there and did not simply wander away from home. We knew we couldn’t leave him, so I scooped him up and we drove to a pet store to pick up a carrier, a disposable litter pan, and some food. We chatted with the employees at the store and decided the kitten was probably about 6 or 7 months old. They also gave us the contact information for a few local shelters that might be able to take the kitten.

The next day I called the local shelters, but none of the no-kill shelters had any room for an additional cat. I couldn’t keep him myself because campus housing didn’t allow pets and because two of my housemates were allergic to cats (the latter being much more of a problem! even just having the cat in my room for a week or so while I sorted things out caused some red eyes and sniffling!). That’s when I called my parents and asked them if I could bring the cat home to be a barn cat on our 17 acre farm in Michigan. I’ll add here that our barn cats at the farm weren’t typical barn cats. They were taken in for regular vet checkups, had heated beds and heated water dishes in the winter, and got lots of attention because we (well, I say we, but given that I didn’t live there anymore, I really mean mostly my mom…) were frequently out in the barn to take care of the horses and occasional miniature donkey.

My parents said that I could bring the cat home to live on the farm, but only after I’d had the cat fixed and it got all the recommended vaccines; they’d been the recipient of several “free” cats and kittens over the years, and thus knew better than to accept another one unconditionally. I agreed, made a vet appointment, and took the cat in.

Aside: This is the part of the story where Tycho and Kepler have a lot in common. The vet thought Kepler (still unnamed at that point) was a girl. This belief persisted right up until said vet did the incision to spay the cat, only to find that there weren’t girl-cat parts in there. So they had to stitch him up and then neuter him instead (and I had to deal with the post-op care for the extra incision). I apparently didn’t do a good job picking a particularly competent vet…

Anyway, the initial vet visit cost something like $50 to do a physical exam and another $50 to do the blood work to make sure the cat was healthy enough to be fixed. Then I had to bring him back for the surgery (probably $150), and pay for all the vaccines kittens need (another $50 or so), because we had no idea if he’d ever had any. I don’t remember the exact details of the cost breakdown, but I do remember that I spent over $300 in total on the vet bills and the bare bones supplies to keep him for a week. I’d spend it all again in a heartbeat (though I would find a better vet…), but that’s so much more than the $20 (heavily discounted) adoption fee I paid to take a neutered and fully vaccinated Tycho home, or the $100 fee for Gus! Shelter cats are a really good deal! Now, I probably could have found somewhere willing to neuter Kepler for less money if I’d had more time to shop around (many clinics or shelters will offer discounted spay/neuter services, and the internet makes it easier to find them, like through this Human Society website!), but you probably won’t ever do better than those adoption fees.

After Kepler was deemed healthy and unable to reproduce, I took him home to the farm. He was slowly introduced to the barn, and took to barn cat life very well. He loved climbing trees (luckily none of the trees were so tall that he couldn’t get down) and hunting birds. He was super sweet, and enjoyed greeting you when you went out to the barn.

Tragically, Kepler didn’t live much past 3 or 4 years old. Despite the barn being very far back from a not super frequently traveled road, he was hit by a car. He’s the only barn cat we ever lost that way (all the others lived very long lives, including one that I think was 17 when she died this past year!), but that’s sadly a risk with outdoor cats. I take comfort knowing he at least got a few really good years, because he so easily could have been hit on that busy road by the restaurant where I found him. But I still miss him because he was such a sweetie. 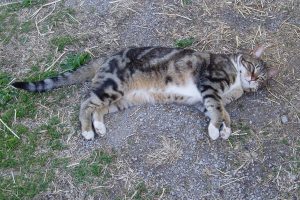 Sometimes life dumps “free” cats in your lap, and I’m really glad I was in a position to find my free cat a good (albeit tragically short lived) home. But I highly recommend adopting from your local shelter if you’re looking to keep kitty startup costs low!

I once found a “free” kitten in a parking lot. It cost me more than $300 to get him neutered and fully vaccinated. Compare this to the typical $80-100 adoption fee to adopt a ready-to-go fixed and vaccinated cat or kitten from a shelter and you will see why I tell people that shelters are the most economical way to get a cat! And you might even get a “discount” cat like Tycho, whose adoption fee was a measly $20!

If you have a “free” cat story, please share in the comments!

5 Replies to “Kittieconomics: there’s no such thing as a free cat”

Advertising/making money is not the purpose of this blog, but I do often recommend and link to products that I genuinely use and like. G&T might as well have the potential for new kitty toys as a result of any incidental advertising because of this (see post about this here). So, disclaimer: Katskitties.com is a participant in the Amazon Services LLC Associates Program, an affiliate advertising program designed to provide a means for us to earn fees by linking to Amazon.com and affiliated sites.